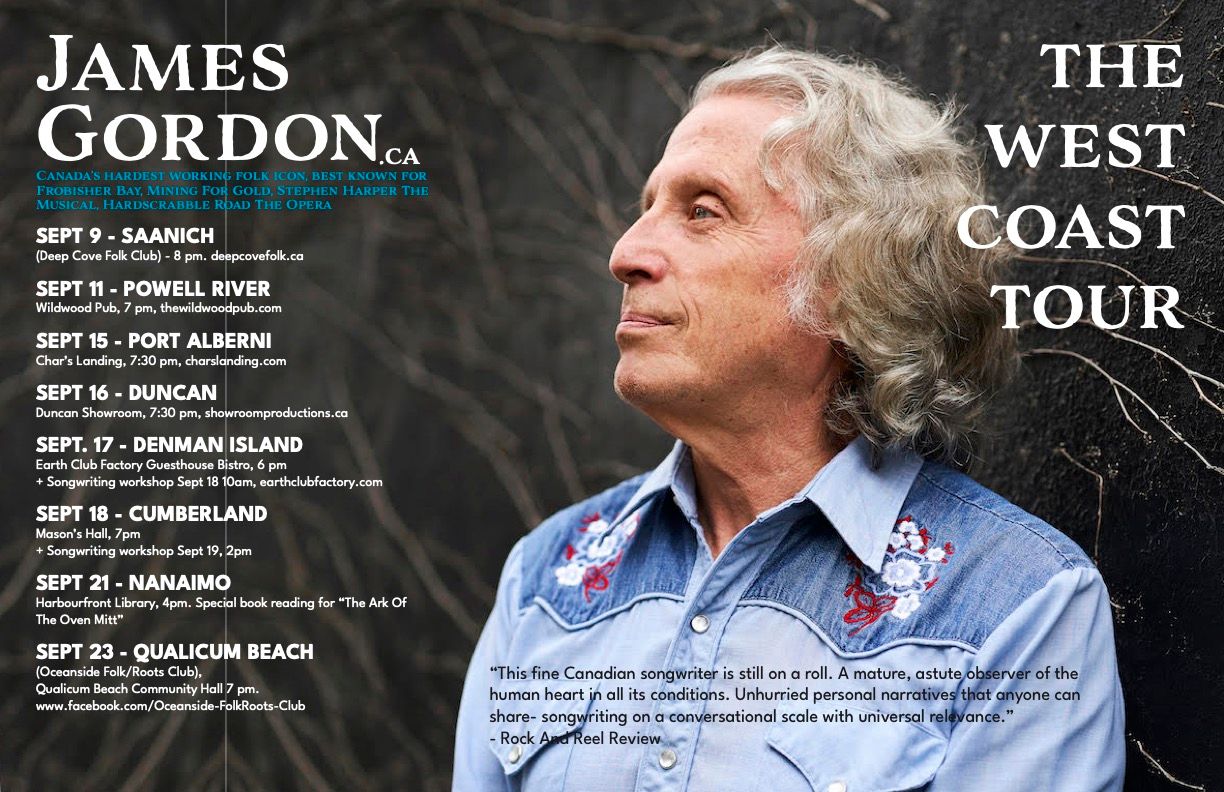 Like most touring musicians, it’s been a real challenge staying off the road during the pandemic. In fact, James Gordon’s new album ‘When I Stayed Home’ addresses that very issue as you can tell from the title.

James loves Vancouver Island, and the kind people on your lovely island seem not to mind him too terribly much , so it seemed natural for him to return to the coast from his base in Guelph for his first tour since you-know-what.

It’s been quite a year already for the veteran songwriter. His first ‘musical novel’ ‘The Ark Of The Oven Mitt’ (about a Canadian band on the road, oddly enough ), was named a finalist for the prestigious Stephen Leacock Humour Award, and the reviews for the unique book (there are 36 songs that accompany the story)- have been remarkably enthusiastic.

This spring Gordon had his first ‘viral’ hit with his controversial song ‘Crybabies Caravan’ about the so-called ‘freedom convoy’; 300,000 hits on YouTube and social media, and a lot of press.

In May and June in Southern Ontario he directed the sold-out run of an equally newsworthy theatre production called ‘Living Below The Line’, written and performed by a courageous group of people all living in poverty.

Interest in his new album continues to be strong, and he’s got a new batch of songs ready to share on the September tour, (dates and info below).

“So many songs. So little time”, that’s James’s dilemma. On this tour he’ll be sharing new works from the album and book, some even more recent works from his new one-man musical ‘James Gordon’s Emergency Climate Musical’ and audience favourites from his extensive back catalogue from his years with the seminal Canadian folk trio ‘Tamarack’ and his years spent as songwriter-in-residence with Arthur Black’s ‘Basic Black’ CBC radio program. He’ll also be giving two songwriting workshops: (He’s done more than 1500 of these in his long career), and will be reading from the new novel at the Nanaimo library.

If his instruments don’t get lost on his flight, he’ll be performing solo on guitar, piano, banjo, penny whistle, mandolin and harmonica and he’ll take audiences on his usual musical rollercoaster ride with everything from the historical to the hysterical.

Here are links to some recent videos:

https://youtu.be/T9rnrRIkqa8 The Great Divide: the single from the ‘When I stayed Home’ album on Pipe Street Records

https://youtu.be/yW7lPp-Mzls For Free: a live video with excellent band

https://youtu.be/TBELHWb1h3c We Are Broken But We’ll Mend- also from the new album

And while you are on YouTube, there are now literally hundreds of covers, many by choirs, of his classic song ‘Frobisher Bay’.

James would be happy to be interviewed in advance or during the tour. He’s at james@jamesgordon.ca 519-827-6481

Here's what's going on these days at HQ.

LOOK: I Started a Podcast!

It's called "James Gordon: Song And Rants Man"- and the first episode is right here:

This 1st episode is drawn from James Gordon's one-man show "Crybabies Caravan: A Comedy of Terrors", about the so-called 'Freedom Convoy' that landed in Ottawa and other cities early in 2022. With humour, 12 original songs, and commentary, James outlines why he believes that the Convoy was misguided, misinformed, and a dangerous threat guided by extreme right-wing agitators. The title song was a viral hit with 300,000 views on social media and YouTube. It produced widespread approval, hate mail and even death threats. 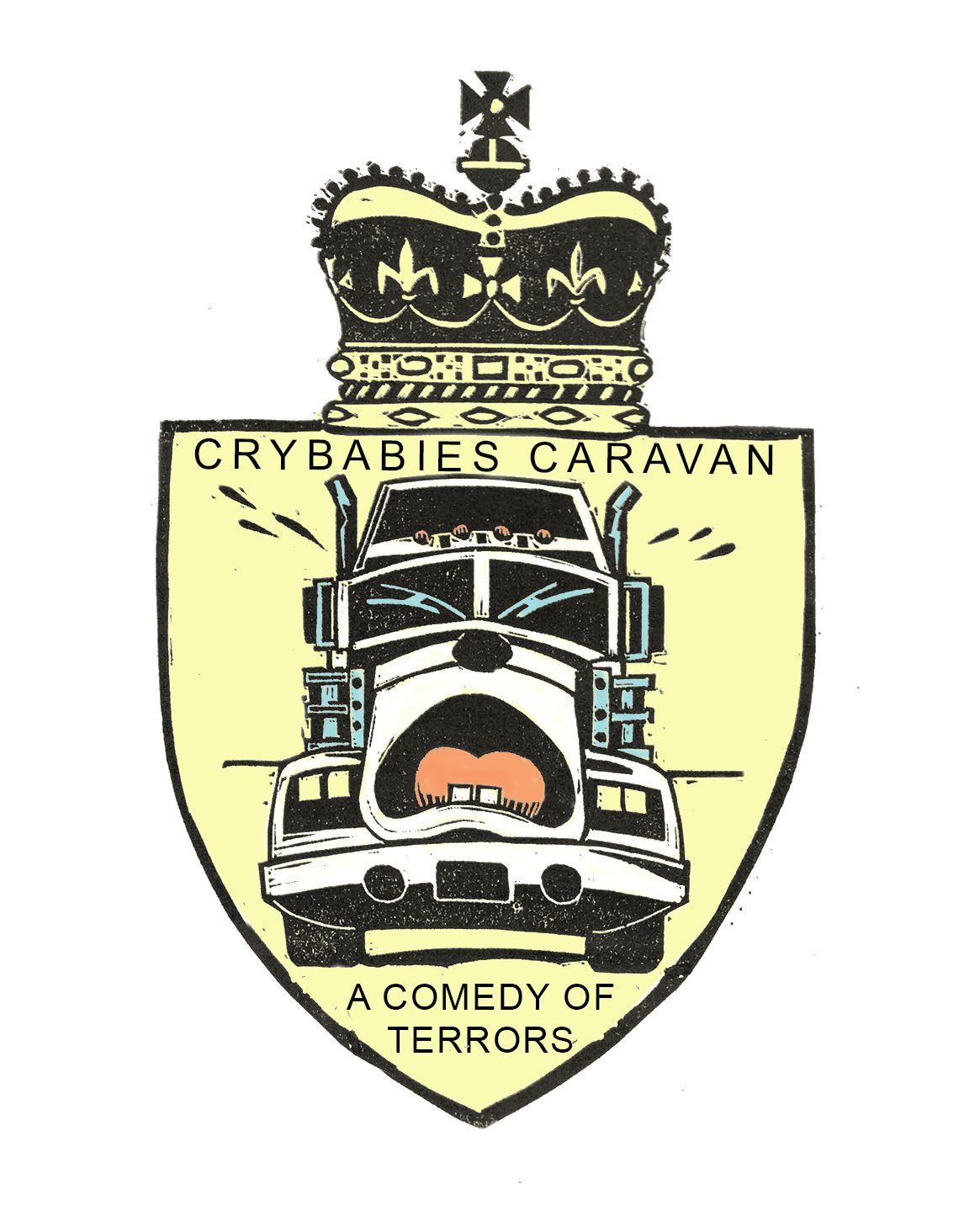 Check it out and spread the word! UPDATE: Episode 2 up now, same link,, part of a two-part series on Climate Change!

This Just In! I'm thrilled to announce that my new Novel "The Ark Of The Oven Mitt" is a finalist for the prestigious Stephen Leacock Medal For Humour. I'm in the final ten and the winner is chosen in September. It's a real honor. Look at the company I'm in! Fingers Crossed. It's a 25,000 dollar prize so if I win I'll just keep writing till the money runs out :)

UPDATE: Didn't make the final 3- but grateful to have been a finalist!

You can purchase the book in hard copy or as an audio book at jamesgordonmusic.bandcamp.com

What else is happening?

I am directing a play in Kitchener-Waterloo Ontario, for Watercourse Theatre, called "Living Below The Line"- (LBTL), a community-engaged theatre project for Waterloo Region residents marginalized by poverty. Diverse, multigenerational individuals with inadequate incomes will collaborate with theatre artists to co-create and present a work about their life experiences. Rehearsals are going well.. it's a full-time job for the month- An inspiring group to work with. Here's the poster. Admission is free! 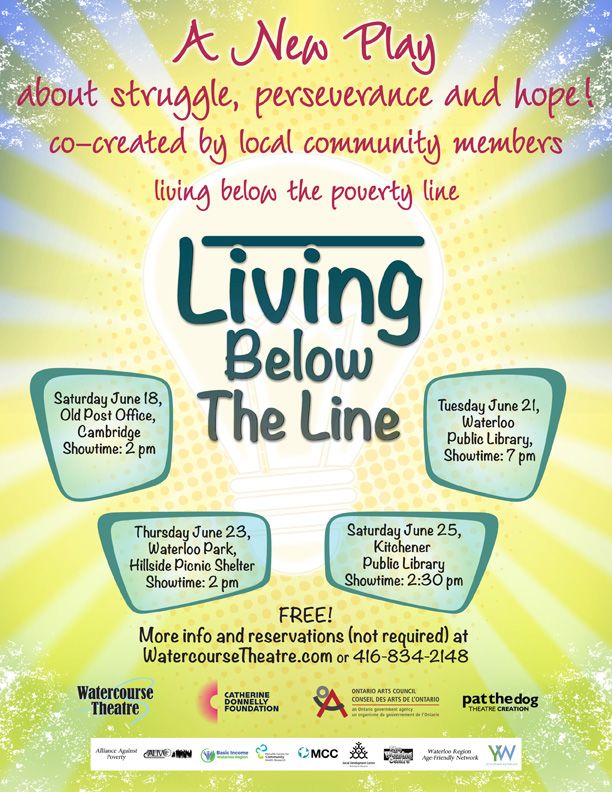 James Gordon, like many Canadians, was dismayed to see the goings-on in Ottawa with what was called the Freedom Convoy but has since become something way beyond truckers.

He wanted to raise awareness about what he saw as a real threat to our democracy. He quickly tossed off a song about it called “Crybabies Caravan” and plopped himself down with his banjo and did a quickie video for social media. Little did he know that the song would become a viral sensation, with more than a quarter of a million views in one week.  Up to 300,000 at last count.

It seems that the veteran Canadian songwriter had hit a nerve. People were keen to talk about their concerns, and Gordon’s efforts seem to have enabled conversations all over the country and internationally.

Thousands of enthusiastic messages and calls of support have kept him busy, most of them showing gratitude for the stance he took on this important issue. The song has drawn its haters too, but Gordon notes that “The song seems to have created a community. On social media when a ‘hater’ goes after me, dozens of supporters come to my aide and speak their mind’.

Due to popular demand he’s now done a radio-friendly full band version, and on YouTube, and in fact airplay is increasing too/

AND due to MORE popular demand, James has produced a 'sequel'- the tongue-in-cheek "Bouncy Castles"

AND - Hot off the Presses: Two more related songs in what is becoming a 'suite' of songs related to 'Crybabies Caravan'- check out "When You Let Love Leave Your Heart: https://youtu.be/LCMEWo9s7pg

and "Convoy Of Hope"- a more optimistic take at https://youtu.be/Iuk_3k_NDWI

It’s been a bit overwhelming for him, and unprecedented for someone who mostly records and performs in Canada’s small folk scene.

Gordon pulls no punches in the song, especially with lyrics like “if you walk with Nazis you’re a nazi too”, “Inconvenienced isn’t being oppressed”, and “You talk about freedom and that’s just fine, until you end up taking mine”. All this is couched in humour. Gordon says that ‘humour can draw people in, then you can hit them with the message”. He has a side hustle as a Guelph City Councillor, and spent years doing topical songs for CBC radio, so he comes by this work honestly.

Fans started to ask to purchase “Crybabies Caravan”, so it’s now available as a download on Bandcamp, and the songwriter/politician was thrilled to discover that, while the download is just a dollar, most purchasers have been contributing up to 25 dollars just to show their support, He decided to accept a dare from a convoy member to donate the earnings from the recording to the Shephards of Good Hope Soup Kitchen in Ottawa, where convoyeurs had demanded food.

It's been quite a ride, with no end in sight. There are even two ‘dance remixes’ from fans on Youtube.

AND- the topic of the so-called "Freedom Convoy" has spawned two more Gordon originals as well, it seems to be becoming  a series... Check out "When You Let Love Leave Your Heart" https://youtu.be/LCMEWo9s7pg - written in response to the hate mail and threats received after posting the "Crybabies Caravan" song.

AND it's a live show now, debuting April 21st in Guelph . We'll bring it your way on request!

I'm slowly starting to book in-person shows, with touring plans for each of the three coming seasons. So much has changed since you-know-what happened, that it's hard to know what's out there, ( especially since my former agent, finding that during the pandemic 20% of nothing didn't really add up to much, retired from the biz, leaving me to, for the time being, do this work myself. I totally suck at it, so if you have some ideas about where I could bring my new music, let me know! james@jamesgordon.ca